United Heritage Insurance started in the 1930s under the name of Grange Mutual Life. Specializing in the design and sale of quality insurance products, the company strives to be service-conscious and maintain a strong financial position for the benefit of policyholders, agents, employees, and stakeholders. The company’s IT department began using an IBM System/38 in the early 1980s and then migrated to the IBM AS/400. They currently have C++ and C# client applications that talk to RPG server programs with Db2 serving as the database.

Since starting with the System/38, United Heritage has created significant amounts of code, much of which runs today without upgrade due to IBM’s commitment to backward compatibility. This situation has always allowed United Heritage to move forward and focus its time on new development, but it also resulted in older programs continuing to run as long as they didn’t break. This older code became an issue when United Heritage sought to become more agile. With code created in the mid-1980s still running on the system, modernization became a major priority.

Onboarding new IT employees — especially millennials — was also a concern, as experienced staff were nearing retirement. How to ensure business continuity, particularly with certain complex programs that were no longer well-understood?

As United Heritage began its modernization program, Software Development Manager Rob McBride felt that a testing tool was essential to ensure that updated code behaved as it did pre-modernization. He sought out Fresche’s X-Datatest, and during a demo session he and his team came away impressed not only with the testing tool, but also with the underlying X-Analysis technology. “X-Analysis gave us high-level views of object usage, data flows and even field usage across our system, and all from a GUI, too. That makes me really happy. So that adage that a picture is worth a thousand words? For me it felt like a picture is worth a million words.”

United Heritage immediately replaced its older, green screen cross-referencing tool with X-Analysis and X-Datatest. The X-Analysis Data Model Diagram feature enabled Rob’s team to see all of their applications and data structures at once. X-Analysis also displayed which files fed into other files, highlighted data flows and identified programs required for testing.

Some of United Heritage’s systems are still based on 80-character punch cards and involve a series of calculations — for example, agent commissions based on hierarchies. Rob McBride describes these transformations as data gymnastics: data is read out to a program, transformed, read to a work file, read out again to another program, and so on. This creates a large number of work files, so grasping and repairing a data structure problem through source is a challenge. Problems need to be seen from a high level and then narrowed down. This is an area where “X-Analysis can help, as it provides developers the ability to see the high level and then narrow down and build out their framework for the problem at hand. They can separate out the files and programs that pertain to their project using X-Analysis application areas.”

Providing the big picture and then narrowing it down is crucial for new hires as they replace retiring programmers. Rob McBride emphasizes that you need to give young programmers a method of understanding your system in a way that’s meaningful to them. “Using X-Analysis to get an understanding of problems from a greater perspective and then to easily follow data flows reduced onboarding times by half.”

Rob McBride and his developers are finding new ways to profit from X-Analysis and Fresche services. Using X-Analysis, a Fresche consultant analyzed and quickly began updating United Heritage code that contained move low zones, multi-record formats, matching records, cycle processing, GOTO statements and numbered indicators 1-99, some of them multiple times in the same program. And Rob himself has come to appreciate X-Analysis’ powerful impact analysis capabilities. With the picture provided by X-Analysis solutions, the road ahead is clear for United Heritage. 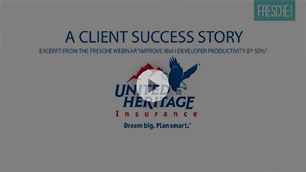 Customer Testimonial“What really got us excited was what X-Analysis brought to the table. We could get high-level views of object usage, data flows and even field usage across our system, and all from a GUI, too. That makes me really happy.”