MedAxiom, the leading cardiovascular performance community in the USA, partnered with Fresche to develop MedAxcess, the largest and most powerful cardiovascular-specific database and web-based analytics tool in the country. MedAxcess is a browser-based IBM i application that is used by MedAxiom’s members to guide key decisions around staffing and equipment.

MedAxcess was originally developed in 2006 in partnership with Fresche’s Web Application Services Team. It provides their members with analytical practice data supported by interactive charts and graphs in dashboards that contain hundreds of metrics.

MedAxcess has evolved and expanded over the years and recently underwent a significant redesign and restructuring to better support mobile devices and improve the user experience for members.

Shawn Smith, MedAxiom’s Director of IT, says, “MedAxcess is one of our core products. It helps our current members compare themselves against other cardiovascular organizations and help them analyze their data to evaluate whether or not they need to look at efficiency or productivity of their organization, and make sure they’re in line with best practices or any government changes and more.”

Fresche was selected by MedAxiom to develop the initial release of MedAxcess. A strong partnership was forged and Fresche continued to work cooperatively with MedAxiom to evolve the application over the past 10+ years. This comprehensive new release was driven by business growth, demand for new features, technology advancements and the need for a more modern user experience.

MedAxcess 3.0 was developed by the Fresche team, and is a complete overhaul of the entire workflow and user interface. It is an intuitive mobile-friendly application that supports MedAxiom’s continued growth and provides a more flexible framework for future enhancements.

The new version improved the usability and navigation through the selection of measures and filters for the various charts and graphs and introduced many value-add features such as the ability to generate PowerPoint slides from dashboard reports and charts.

“We’ve worked with Fresche for many years since the first iteration of MedAxcess. We decided to continue our relationship with Fresche because of the great work from their development and project management team, as well as the great experience we had in collaborating with the Fresche team,” says Shawn.

The Power of Analytics

MedAxcess’ proprietary and interactive database allows MedAxiom’s members to query extensive data resources on demand and provides a powerful tool for organizations to review, benchmark and interpret their data.

At the heart of MedAxcess is a data warehouse stored in DB2 tables on IBM i. Data is organized in an OLAP cube that uses multi-dimensional storage to facilitate a wide range of queries and reporting. MedAxiom members can configure sets of measures and customize how they analyze their data, providing valuable insight into practice performance and efficiency.

Fresche initially laid a solid foundation for the application using their WebSmart ILE and Nexus Portal solutions. They continue to use WebSmart and Nexus in MedAxcess 3.0, with the application hosted on IBM i using Apache Server. The team chose Bootstrap as the UX toolkit to develop a responsive, mobile-friendly design.

“We have multiple levels of security that are completely customizable down to the user and measure level,” says Shawn. “We use Nexus to authenticate the user login using single sign-on and WebSmart to authorize the level of access. Fresche created a custom database table within the OLAP cube to allow us to enroll users into MedAxcess and assign them a specific security level, through a custom WebSmart admin interface.”

There are many factors that make a web development project successful and a collaborative relationship with the client is key. Fresche worked closely with MedAxiom’s team from initial design and prototype through development.

MedAxiom first created a series of mockups and new UX designs for the site. This represented a critical first step in setting the stage for the new release of the application. Through a series of workshops with the Fresche team, these mockups were transformed into an initial prototype using Bootstrap, a mobile-friendly framework, which allowed MedAxiom to see the proposed design and workflow prior to any significant development.

“Throughout the entire process, Fresche made us feel more like a team member than a client,” says Shawn. “When we picked up the phone, there was always someone to answer our questions, whether it was tech support or the developer who was doing the work.” After the initial prototype was approved, development proceeded in sprints that focused on delivering incremental new features and enhancements for key components.

“Our team worked directly with Shawn at MedAxiom,” says Fresche Project Manager Kris Waugh. “Communication and collaboration with Shawn was excellent and a key part of the project success. We met several times per week to review progress, align our visions early and adjust our sprints as needed in response to their feedback. The result is a modern, intuitive, feature-rich application that was well received by the membership and something that all of us are very proud of.”

Great care was taken to ensure the successful deployment of MedAxcess 3.0. This started with introductory webinars and a series of training sessions. The application was then deployed to production in a staged release that allowed MedAxcess users to revert back to the previous version (if needed) during a three-month adjustment period. MedAxiom also created training videos and page-sensitive application help. The new mobile-friendly design, packed with new features, resulted in a smooth transition for the membership.

“The team loves the new look and the application compatibility on multiple devices, whether it’s an iPad, Mac or PC. The enhanced export to PowerPoint feature is used heavily by our external and internal users. They love the new dashboard feature as well as the comparison charts. This allows them to interpret information at a glance,” says Shawn. 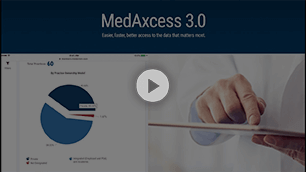 Customer Testimonial“We’ve worked with Fresche for many years since the first iteration of MedAxcess. We decided to continue our relationship with Fresche because of the great work from their development and project management team, as well as the great experience we had in collaborating with the Fresche team”

– Shawn Smith, Director of IT, MedAxiom