American Packaging Corporation (APC) is a leading flexible packaging manufacturer and converter in the United States. They have three main locations that work together to create packaging material for companies such as Unilever, General Mills, Hershey and Mars.

APC has three large databases running business-critical applications on an IBM Power System. As APC experienced substantial business growth, their IT team needed to understand their environment and establish a plan to modernize, transform and develop their most essential business applications.

APC first turned to Fresche through its BCD brand in 2012 to transform, parse and distribute data from spool files on IBM i. Fresche has since become APC’s trusted advisor on best practices for taking on possible future projects and solving a multitude of challenges.

The company’s first initiative with Fresche was a revamp of their corporate-wide safety reporting system using WebSmart. Corporate IT Manager, Max Engel, recently sat down with Fresche to talk about the safety reporting project and how APC is leveraging their IBM i infrastructure and applications to meet the organization’s strategic business goals.

APC was using a paper-based safety system that was no longer efficient for their growing organization. Each day, hundreds of employees would have to manually fill in safety cards, verifying that they had completed safety observations. These cards were later collected and consolidated. Not only was this process inefficient and wasteful, it was not immediately effective, as the process was only complete after all of the cards were consolidated.

APC needed a solution that would save their employees valuable time and effort. “We’re doing a lot of expansion right now,” says Max. “We just built another plant in Wisconsin and have brought a new facility in New York online. We have experienced substantial growth and our IT department is trying to keep up.”

Max envisioned a new, automated, one-step process that was simple and could integrate seamlessly into their current IT environment. To accomplish this, APC required a solution that their developers could learn without prior web development expertise and wouldn’t require them to outsource the work.

“All of our developers were strictly green screen programmers so we were looking for something where we could get into the web but not lose all of our RPG skills at the same time,” says Max.

Max chose Fresche’s WebSmart for the project because it gave APC the ability to build a customizable web application that could be created, maintained and enhanced by his team of RPG developers. WebSmart ILE uses a custom language that further shortens the learning curve and generates RPG in fewer lines of code.

“WebSmart looked like it was a lot easier for us to really hit the ground running with, so that’s why we went with it,” says Max. Guided by the training and ongoing help of Fresche’s Support team, Max and his team were able to deploy a brand-new web application in less than a month.

“The rollout was actually fairly simple,” he says. “Once we had all the programs written we just put it out there for a trial time to test it. Everybody really liked it, it worked well, was easy to use, and it demonstrated that the IBM i was more than a green screen system. Once they saw that, of course there was a lot of other application development that they wanted us to do.”

American Packaging Corporation employees now have a new safety reporting web application. “The benefits have been that it’s so much easier to use. It’s very easy to maintain,” says Max. Web development didn’t stop at the safety reporting system. “We had an old Windows app that had been written 20 years ago that we’d been using for scheduling. We used WebSmart to rewrite the schedule in a couple months and employees just love it. It’s so easy to use and now we have people who can actually maintain the app.”

On the business benefits, Max comments: “It gives our application a new modern interface and leverages what our users are comfortable with. We have a lot of customers that come through our plants and when they see state of the art equipment on the floor and computer applications that match, it gives a positive impression. The applications we’ve rewritten are leading edge and it’s made our modernization experience much easier.”

APC continues to evolve their systems by modernizing their core applications and undertaking new, strategic development projects. They’re confident that their IT strategy will support the needs of the business for years to come and look forward to a long future on the platform. 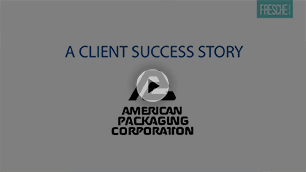 Customer Testimonial“The roll out was actually fairly simple. Once we had all the programs written we just put it out there for a trial time to test it. Everybody really liked it, it worked well, was easy to use, and it demonstrated that IBM i was more than a green screen system.

Once they saw that, of course there was a lot of other application development that they wanted us to do.”